Chicago was just a small town when Ferdinand Haase arrived from Germany in July of 1849.  He believed in the promise of the "new country." He soon realized his upholstery and harness making trade would not serve him as well here as he had hoped and bought a large tract of land west of the city and turned to farming and raising cattle.

Ferdinand's landholdings of Chicago's west boundaries then became very extensive, so he sold one tract of the land to Concordia Cemetery.  With the proceeds of this sale, he took his entire family, which now numbered wife and five children, back to Germany.  Unfortunately, the Haase estates, (as Ferdinand's landholdings and investments were then called) came upon some unaccustomed lean times.  The problem now was to revitalize the family finances and get a fresh start.  Ferdinand decided to call his two oldest sons Emil and Leo to a meeting.  At this meeting he suggested that with the family's vast acreage west of Chicago, it may be a good investment to go into the cemetery business.  In 1874, the two eldest Haase sons opened Forest Home Cemetery.

To finance the cemetery's preparation and early cost of operation, they sold gravel which they dug from a pit on another section of their property.  They sold the gravel for $2.50 per yard.  This gravel, in turn, was used by the roofing industry, in several neighboring townships as they prepared and laid down new roadbeds.

As the cemetery business grew, so did several of its problems.  There existed a confusing hodge-podge of corner posts and lot markers which lot owners at Forest Home and other cemeteries throughout the country built to show their lot boundaries.  Further problems came with the necessity both to provide water throughout the cemetery and to also provide a drain off for excess water after winter thaws and spring showers.  Leo Haase found solutions to these various problems could be made of concrete.

With the knowledge he had gained over the past several years in selling gravel and aggregate to concrete contractors, he decided to spin off a separate operation from Forest Home Cemetery.  The function of this new company would be the manufacture of concrete products.  In 1880, Leo Haase opened the L. G. Haase Manufacturing Company.  Cemetery lot markers, concrete benches, hydrant boxes for cemetery hydrants, well tile, catch basin covers, sewer tile, and sectional concrete boxes used as outer burial receptacles in Forest Home Cemetery were some of the major products he produced. Leo Haase managed the L. G. Haase Manufacturing Company for the Haase estates from its inception, until 1913 when his nephew Wilbert W. Haase became manager.

In 1913, 139 concrete burial vaults were sold in the Chicagoland area by the L. G. Haase Manufacturing Company.  In 1916, a portion of the present office and factory at 1015 Troost Avenue, Forest Park, Illinois was built with factory facilities used primarily for the manufacture of concrete burial vaults.  An increase in burial vault sales was experienced due to the influenza epidemic that took place from 1918 to 1919 when influenza deaths reached 1,500 for every 100,000 people.  At that time only L. G. Haase Manufacturing Company had sufficient inventory to meet the demand.

In 1919, Wilbert W. Haase purchased the L. G. Haase Manufacturing Company from his uncle, changed its name to American Vault Works, and operated the business as a sole proprietorship.

On May 15, 1924, the business was incorporated as the American Vault Works, Inc.  During this year, five acres of land were purchased in Des Plaines, Illinois and a plant of 2,250 square feet was erected.  This plant serviced funeral directors interring vaults in cemeteries in Chicago and its surrounding suburbs.

In 1928, experimental work on the development of the asphalt lined Wilbert burial vault began.  Wilbert applied his creativity to the vault business and in 1930 he had invented the first waterproof concrete vault in the country.  On October 7, 1930, the first Wilbert burial vault was interred in Oak Woods Cemetery located in Chicago.

In 1930, Wilbert, as a sole proprietorship and separate from American Vault Works, Inc., formed a new company called the Wilbert W. Haase Company.  This business was established for the purpose of selling exclusive territorial franchises to prospective licensees.  The licensees’ purpose was to manufacture and sell Wilbert burial vaults under their "applied for" patents.  In addition to selling the franchises, this new company also sold burial vault forms as well as other equipment, materials, and supplies necessary to manufacture concrete burial vaults.

Wilbert, who was also a pilot, then took to the skies to introduce his vaults to potential manufacturers throughout the country.  His own company, American Vault Works, became the first licensee.  On May 15, 1944, the corporate name was changed from American Vault Works, Inc. to the American Wilbert Vault Corp.

In 1952, American Wilbert Vault Corp. purchased the Otis Vault Co. in Elgin, Illinois.  This plant was enlarged to provide greater production and service capabilities for this market northwest of Chicago.

While it is true that American Wilbert Vault Corp. owes its strong beginnings and early success to the determination and good business sense of Wilbert W. Haase, it is equally true that its phenomenal growth and present preeminence are the results of the judgments, drive, and character of Mr. Haase's successor, Richard G. Reichle, Sr.

Mr. Reichle and Mr. Haase met when Mr. Reichle was teaching at Worsham College of Mortuary Science in Chicago.  Dick Reichle joined American Wilbert Vault Corp. in 1945 and became its President in 1947.

By the very nature of its business, American Wilbert Vault Corp. became enmeshed in major tragedies as they occurred in its market.  One of the most recent and heartrending was no exception.  On December 1, 1958 a fire that occurred in Chicago shocked its millions of citizens.  The blaze at Our Lady of the Angels Grammar School claimed the lives of 95, all except three of them were children.  Because of its inventory, American Wilbert Vault Corp. was able to immediately donate 53 MONARCH WHITEX burial vaults for the mass burial of those interred in Queen of Heaven Cemetery, not far from the location of the company’s current headquarters in Hillside, Illinois.

In 1970, Dick Reichle and the American Wilbert Vault Corp. received national recognition as well as a citation by Wilbert, Inc. for the company's sale of its 1,000,000th Wilbert unit.

Until 2011 the executive and sales offices were headquartered on the site of the original American Vault Works, Inc. in Forest Park, Illinois. American Wilbert delivers Pierce Chemicals products to all counties in Illinois marked as "-D". All other counties may order through PierceDirect. 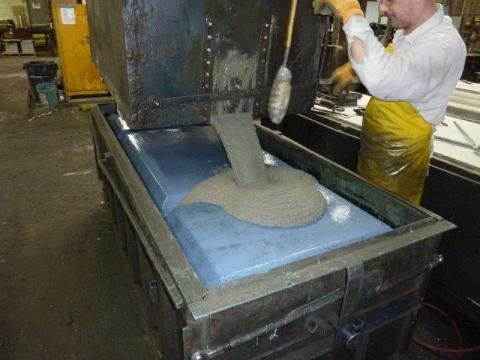 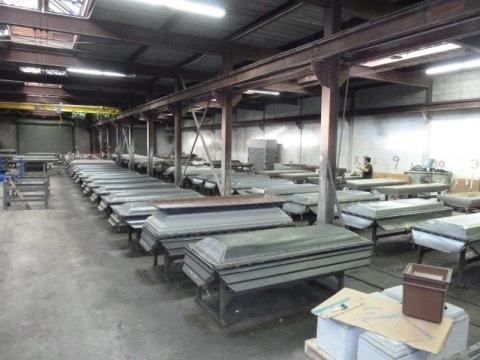